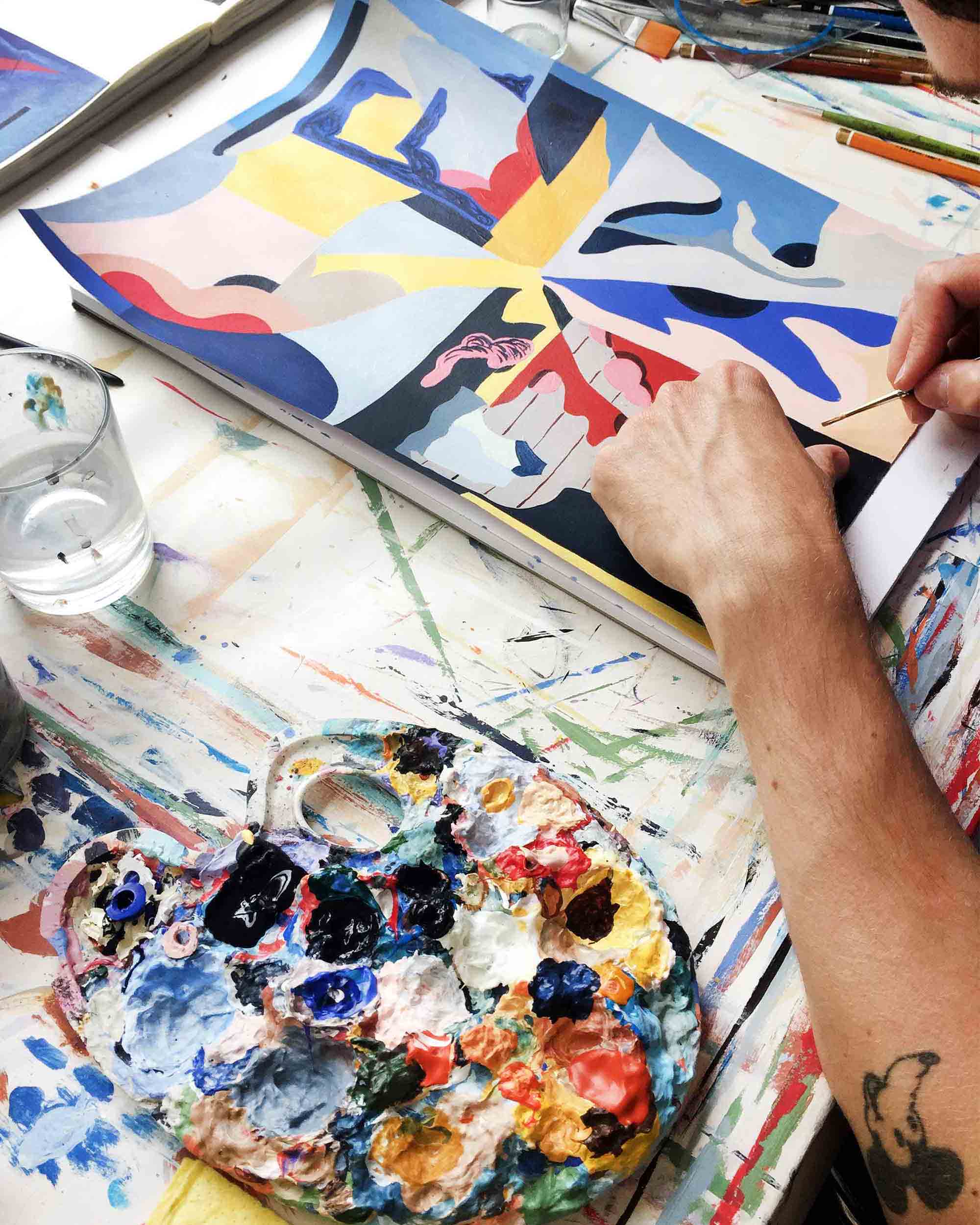 Your art practice spans from painting and drawing to animation while working with both analogue and digital tools. What can drawing do that other media cannot?

Drawing definitely plays an important role. Without it, it wouldn’t work at all. It’s an integral part of and often the origin of…well…almost everything, actually. When I go through my sketch books, I discover ideas for compositions, publication series or even animations. They might often be very rudimentary, it can be just a shape that I like or even a figure. But I rarely use drawings as direct sketches. They are independent. A collection that I can refer back to at any time in order to initiate new works. The nice thing, of course, is that drawing can be done anywhere and I can vary the tools. However, over time I developed a repetitive set-up with the simplest of tools. Sketchbooks with yellow paper, ink fineliner and sharpie.

How do painting, drawing, comics and animation relate to one another other in your work?

Well, first of all, I’m going to exclude the question of comics. There is certainly an interest, but I don’t really use it as a primary means. You quickly end up with storyboards or storytelling. And I always try to break or circumnavigate these somehow.

Over the years, all areas became interdependent. I jump between all of them and don’t see boundaries any more. That was a very liberating step. Of course, there are limits to the processes themselves, or I haven’t yet reached the point where everything completely merges. This is an issue that keeps accompanying me, but it is definitely also an enrichment and an incentive for new things to happen.

You started working with animation while you were studying at the Art Academy Burg Giebichenstein in Halle. Why did animation become necessary or interesting for you at some point?

I studied communication design with a focus on illustration at the art academy. That’s where I first got in touch with moving drawings. Well, it was that moment which probably everyone knows, when you set your own drawings in motion for the first time. It opens up so many new approaches and ideas. It can be a bit overwhelming. Then there is the realisation of how much work is behind it. I soon reached a point where I became a bit bored with the processes (figures, stories,…). It was important that I always tried to discover new works and artists for myself. To connect worlds. That gave me incentive again. Not everything has to be so schematic, film works don’t necessarily have to tell stories or be entertaining. My professor Georg Barber / Atak and the animator Kathi Käppel strongly supported me and showed me new ways. It was good that they don’t have a technical background in animation and thus assessed the work differently. 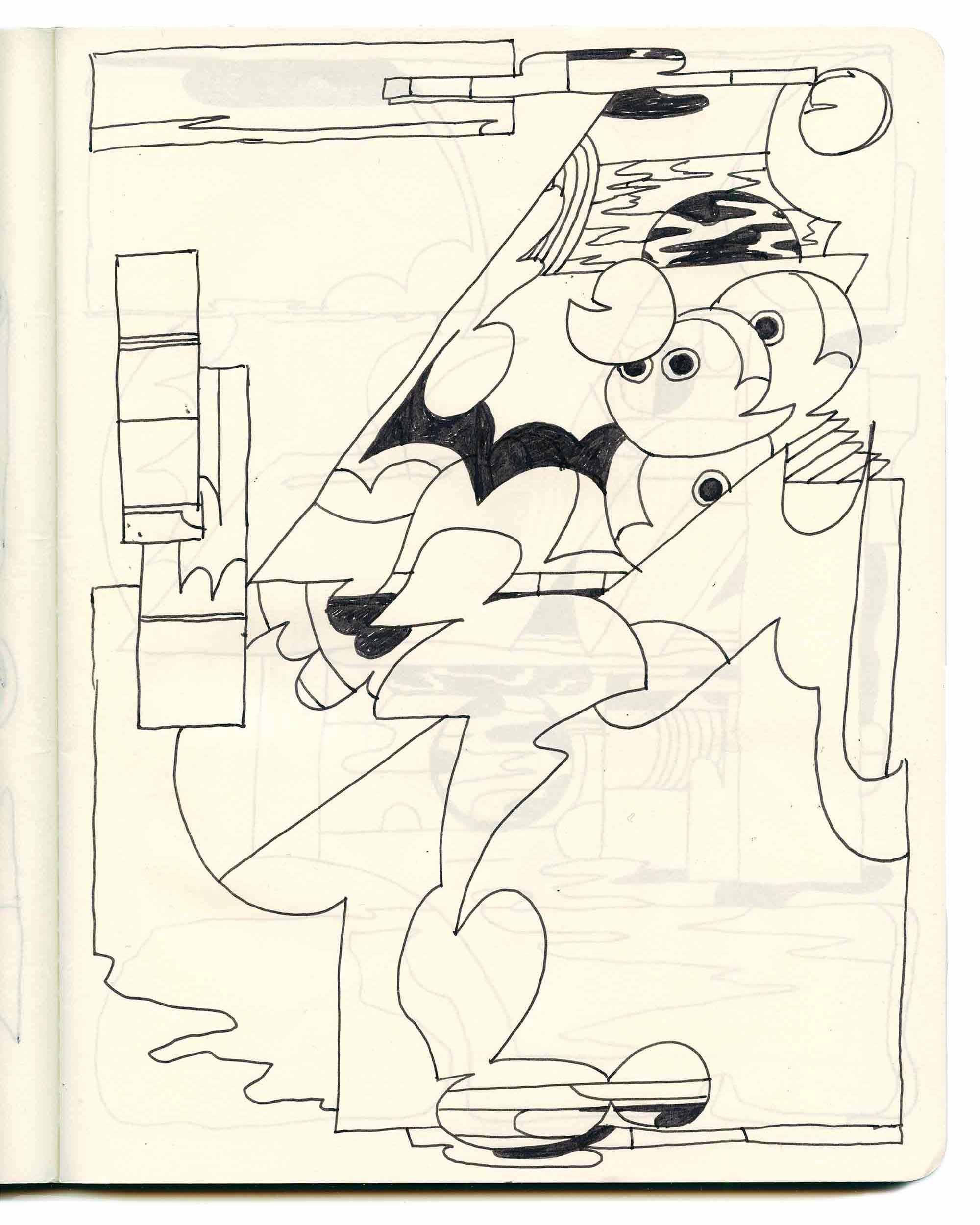 Drawing is a very direct way of expressing yourself artistically. How do you feel about the technical “superstructure” that the production of an animated film entails? Do you perceive it simply as an extension of your possibilities or is it restricting?

I try to ignore the fact that you can think about so many things beforehand. But you don’t have to. As you mentioned above, I use and combine different media and can thus I am able to create my own processes. Of course, I want to restrict myself as little as possible, but when you’re working on a production, certain rules or circumstances just come at you. The simplest of these is probably: you have to finish at some point. I am aware of the technical processes and try to integrate them as best I can. But without falling into a routine or let them become a burden.

Would you say that you approach drawing differently when you create drawings for animation? Does your drawing strategy change?

A different approach is probably said too much. However, in the animation process I naturally adapt in order to move forward or I translate things in a different way. For example, I avoided digital processes for a long time, or better to say, they didn’t interest me. Due to commissioned work this changed and today I see it as a technical extension or facilitation. Anyway, I always keep my background in mind and think in a more analogue way.

Do you consider conventional animation rules relevant for your work?

I wouldn’t say that I disregard the animation principles. I’d rather say I bend them to make them suitable. The animation process itself is usually very monotonous and certain rules make it easier for me or lead to better results if I consider them a bit.

But I’d also say that it can be a hindrance if you just want to animate something and first draw a storyboard for 5 weeks because it’s supposed to be part of the process. This torture through certain work stages is not necessary and it can narrow you down.

Did you develop your own rules or strategies for setting your drawings in motion?

Oh. Often, or almost always, I make the old beginner’s mistake of just starting with the beginning and moving on to the next image. This gives an awkward stiffness to the sequences. That’s probably what led me to my interest in rather soft animations. And now I often try to juxtapose or combine the two.

In addition, I never actually correct. For various reasons. Mainly to preserve the immediacy of the moment. Of course, with digital work it’s tempting to just make a second or third attempt, but it becomes too controlled and too arbitrary for me. I find it refreshing to see a few mistakes in the film and to show a kind of unpredictability as well. 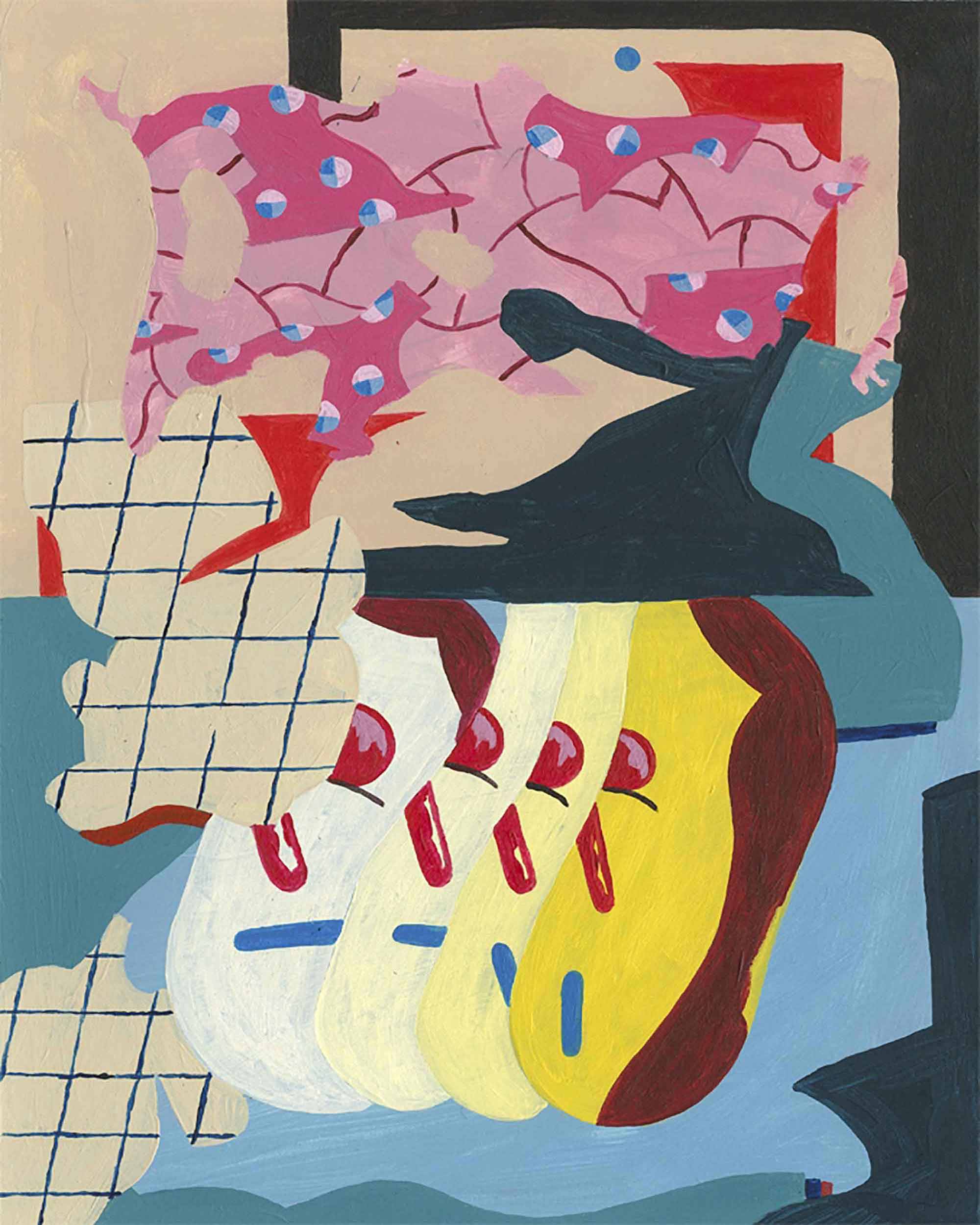 You work on your personal projects, but you also animate for commissioned work. Does your approach to your artistic projects differ from conventional production methods?

Yes. Definitely. It wouldn’t work in any other way. That’s what all these animation rules are for: That you can work with a team and the person you are working with has the same understanding of the processes or knows why it works in this particular way and what comes next. It is very helpful to know about the processes to some extent in order to communicate the individual steps to the outside world.

How do you prepare a film production? How much is determined, how much freedom do you need?

The first step is usually the creation of material for myself. It has to have a certain quality to it, something that takes me to the next point. Once that’s up and running, I move forward step by step. Often, the processes mesh or go back and forth. It’s usually a very organic process. Under certain circumstances, completely different project ideas can emerge. In the meantime, I have also learned to accept to consciously continue somewhere else when something falters or no longer works, to later, at best, connect these open ends. Sometimes they are very far apart, so it is a challenge to connect them. But that is all part of it and is being integrated into

Animation is usually time-consuming. Did you ever consider to involve others in the production of your films?

So far, I haven’t been in that situation yet. With certain techniques I can imagine to involve others. But my work is usually very graphic and line-oriented. So I imagine it a bit strange to let someone to the drawings. The work itself.

What project are you working on at the moment?

I’ve been working on digital paintings/drawings. It was quite a fun trip to see how a translation of my analogue paintings on a tablet with a digital pen would work out. That actually went quite well. The dimensions in which one then starts to think are particularly crazy. You can enlarge everything infinitely. The format is no longer relevant. You can choose from a zillion of brushes. I had to establish some rules for myself in order to get a grip on it. I don’t know yet if and how I will continue. I think it was a good addition to my practice. Ideally, these digital pictures will be translated back into analogue ones.

One project I’m really looking forward to and which has been lying around for far too long is a music video for an artist friend of mine. I already started to build up parts of an imagery world and will start animating it soon. There are a few ideas for pictures, which will then complement and develop each other on the go. I hope they will come out nicely.

I haven’t thought about a new film yet. Five years between the last two is quite far from one another. But they are both completely different in their aesthetics and their way of making. I think that is quite a good thing. Let’s see what’s gonna happen next. 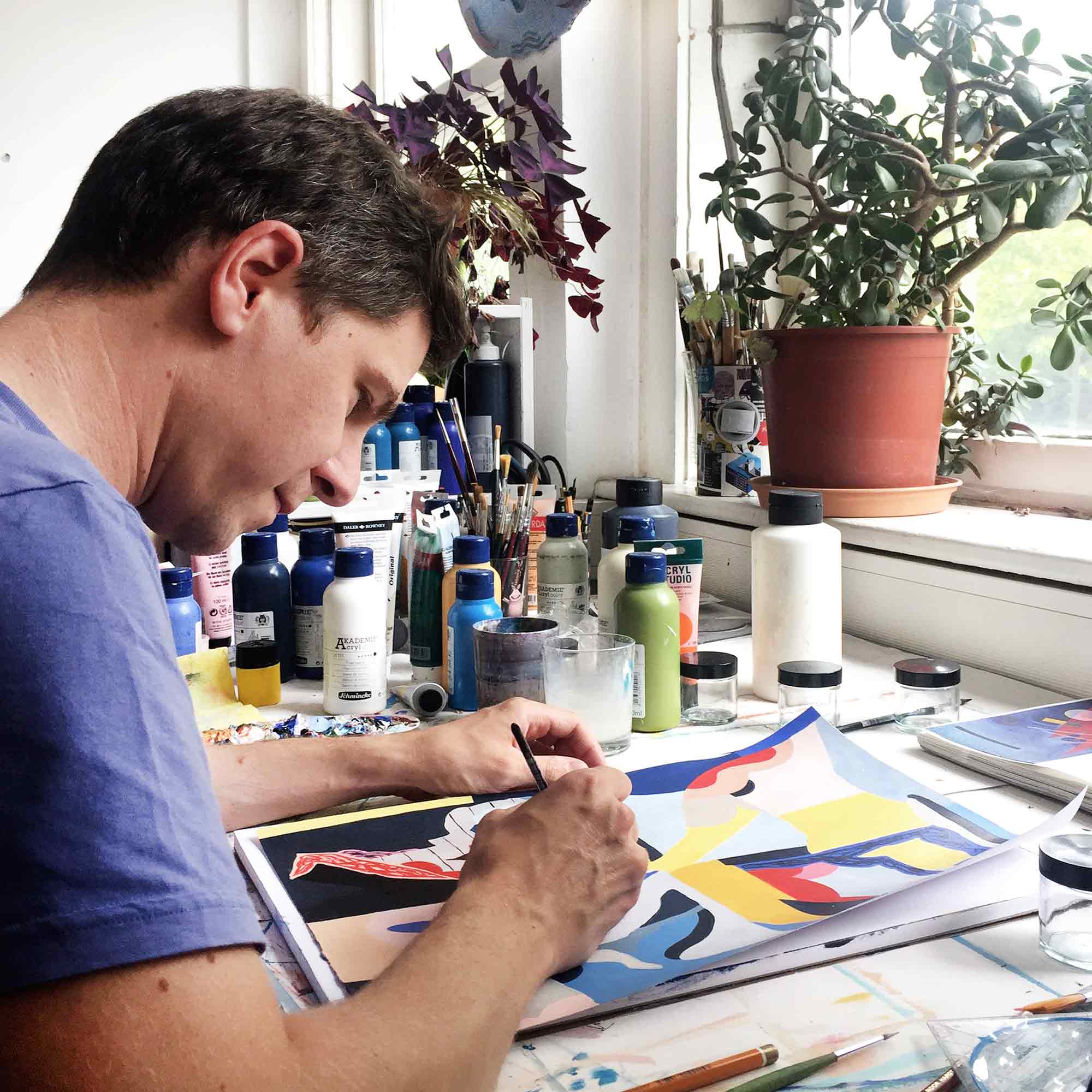 Tim Romanowsky (1981) is an artist and animator from Leipzig. He works on individual animated films as well as commissioned works. Under the label LORO (with Stefhany Y. Lozano) he regularly publishes graphic-zines with his works and shows them in exhibitions in Leipzig, Berlin, Antwerp, Seoul,…